An easy twist on a classic, this Tequila Gimlet is one refreshing tequila cocktail. Made with fresh lime juice and agave nectar!

Why You'll Love This Recipe

A classic gimlet consists of gin (or vodka), lime juice or lime cordial, and simple syrup harkening back to the late 18th century by British sailors. Tequila, by contrast, adds a distinctive extra dimension to this variation on the classic cocktail.

Here are a few quick notes about the ingredients in this recipe. You can see a complete list of ingredients and instructions in the recipe card below.

Tequila blanco - Also known as white tequila or silver tequila. The clear liquor blends nicely with the other flavors and allows each ingredient in this drink to shine. Don't have tequila? While it changes the flavor profile, vodka, gin, or white rum can be substituted.

Fresh lime juice - Fresh is best but you can also use store-bought 100% juice. Rose's Lime Juice (also known as Rose's lime cordial) can be substituted, but since it is sweetened, decrease the amount of agave nectar called for by ¼ of an ounce.

Agave nectar - Instead of simple syrup, agave seemed like the perfect natural pairing with tequila. Its syrupy quality lends itself well to take the place of lime cordial. Plus, it allows for skipping the process of making simple syrup.

Before you start: Have your ice cubes ready.

Step 2: Strain mixture into a chilled coupe glass or martini glass and garnish with a lime wheel.

Cocktail shaker - A simple shaker works best for this cocktail recipe. If you don't have a shaker on hand, the drink can be stirred in a mixing glass with ice and then strained with a fine mesh sieve.

Jigger - Use this to measure the tequila, juice, and agave nectar. Don't have a jigger? That's okay. Use a one-cup liquid measuring cup with ounces marked instead.

Coupe glass - Serve this tequila gimlet recipe in a coupe glass or martini glass. Any stemmed chilled cocktail glass will do.

How do you serve a gimlet?

You can serve a gimlet straight up or on the rocks.

What glass do you serve a gimlet in?

Gimlets are traditionally served in a coupe glass, but a martini glass can be used as well.

Are gimlets shaken or stirred?

A gimlet can be shaken or stirred until chilled.

Love this recipe? Please consider leaving a 5-star 🌟🌟🌟🌟🌟rating on the recipe card below and let me know what you think in the comments! 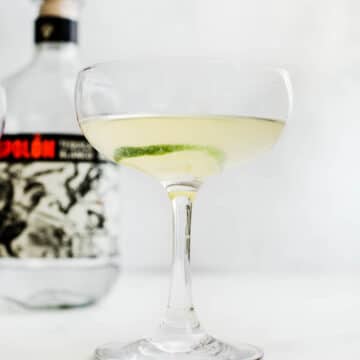